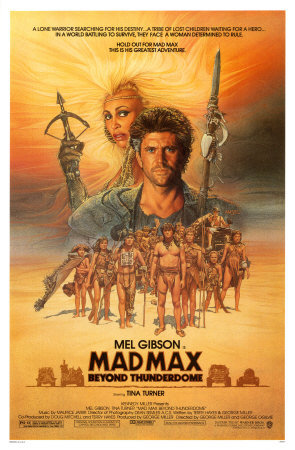 Mad Max Beyond Thunderdome (sometimes rendered as Mad Max: Beyond the Thunderdome) is the third film in the Mad Max film series. The 1985 sequel finds Max Rockatansky (Mel Gibson) battling in a fighting arena known as Thunderdome as well as stumbling upon children who are descendants of plane crash survivors and believe that he is their savior. The cast includes Tina Turner and Bruce Spence. After a hiatus in the series of twenty years, the film was followed by Mad Max: Fury Road in 2015.

The following weapons were used in the film Mad Max Beyond Thunderdome:

As in The Road Warrior, Max (Mel Gibson) carries a sawed-off shotgun, an older model with exposed hammers (unlike the shotguns he carried in the first two movies). It's used only once in the beginning of the movie against a Bartertown guard. Max turns in his weapons as a condition of entering Bartertown, but forfeits them when he is banished for "busting a deal."

Max's gun is similar to this sawed-off Rossi Overland 12-gauge.

Max (Mel Gibson) pulls his sawn-off shotgun on a guard.

Jebediah Jr. (Adam Cockburn), the Pilot's son, attempts to rob Max and the others with a Stevens Single Barreled Shotgun with some kind of expanded barrel and an M1 Carbine.

The Stevens Shotgun is in his right hand of Jebediah Jr., the pilot's son.

What appears to be a High Standard K-100 Shotgun with a short barrel is seen wielded by Blackfinger.

On the right, Blackfinger racks his sawn-off shotgun.

A Mauser C96 pistol is among the many handguns that were in Max's (Mel Gibson) possession before they were confiscated from him by the Bartertown authorities.

Max pulls his C96 Broomhandle on the Collector (Frank Thring).

Max decocks the hammer on his C96.

A Smith & Wesson 29 is amongst the many weapons surrendered by Max's on his entry into Bartertown. Note that this pistol is not Lord Humungus' piece from The Road Warrior, which - besides sporting a scope - has a substantially longer barrel (8 inches on the 29 in Road Warrior; 6 inches at most in Thunderdome). 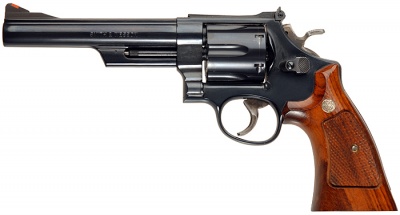 A Ruger Mini-14 with a rare underfolding stock, 30-round magazine, and barrel vent is seen wielded by Ironbar (Angry Anderson) in Bartertown.

Ironbar takes aim with his Mini-14.

Ironbar lies unconscious with his Mini-14 laying next to him.

A Lee-Enfield is seen holstered on a Motorbike Sidecar during the train chase scene but is not used, one is also seen in the hands of a Bartertown citizen.

The barrel of a Lee-Enfield rifle is seen on the right.

The bikers Lee-Enfield rifle is seen on a sheath on the front of the motorcycle.

Best shot of the Lee-Enfield stock.

An M1 Carbine is seen wielded by the Jedediah Jr., the son of the pilot Jedediah, who is also armed with a shotgun at the end of the railway line but are not fired. An M1 Carbine is also part of the tribal spear carried by Slate, the eldest of the male "waiting ones." When Savanna threatens to leave the camp, Max "borrows" it from Slate and removes the spear point affixed to the underside of the barrel. A closeup of the chamber is visible when Max chambers a round and while the manufacturer is unknown, the numbers 30 are clearly visible. Also the round chambered is very short, typical of that of the .30 Carbine round. A closeup of the muzzle is shown, as well as the rear peep sight is clear when Max shoulders the rifle.

Closeup of the rounds hanging as windchimes.

Closeup of a round being chambered.

Closeup of the muzzle.

Max preparing to fire the rifle to scare Savanna.

The M1 Carbine is in his left hand of Jedediah Jr.

What appears to be a Mauser Karabiner 98k is carried by a man entering Bartertown at the beginning of the film.

The Karabiner 98k is slung over the mans, second from the rights, shoulder.

Closeup of the K98K.

When Aunty is addressing the Citizens of Bartertown, there is a guard standing behind her, with a Winchester lever action rifle.

The guard behind Aunty holds his rifle.

A modified M60 machine gun, identified by its flash hider, is seen in the hands of one of Aunty's guards.

On the left, one of Aunty's guards aims the modified M60.

Weapon on the right. 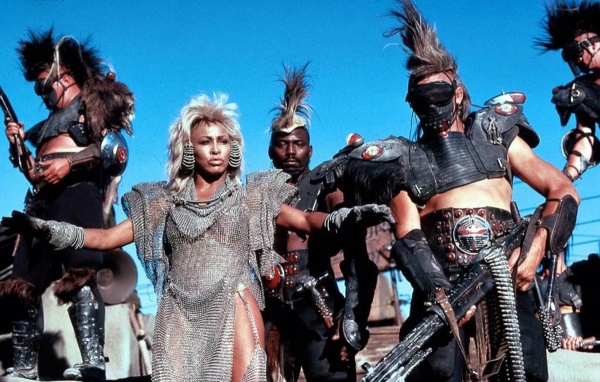 As in The Road Warrior, a majority of all the wasteland survivors use crossbows as their main line of defense.

One of Aunty's guards fires his wrist crossbow.

Ironbar fires two crossbows at the same time, during the Thunderdome match.

During the train pursuit, one of the vehicles is seen with a mounted spear gun on it. Ironbar mans and uses one during the chase.

The vehicle on the hill, has a guard manning a spear gun on it.

Some pistols are seen hanging behind the weapons collector's head.

Bartertown guards pull their guns on Master-Blaster. A few are identifiable: There appears to be a double-barrel shotgun at the top; a Mossberg 500 without a fore end, and a home-built rifle, reminiscent of a Browning Automatic Rifle, with a pistol grip and massive MG 81-style flash hider, at the bottom.

More guards, more guns. Hard to tell what they all are.
Retrieved from "https://www.imfdb.org/index.php?title=Mad_Max_Beyond_Thunderdome&oldid=1250185"
Categories: