Light at the Edge of the World, The

The Light at the Edge of the World is a 1971 American-Spanish adventure movie directed by Kevin Billington and based on the 1905 novel Le Phare du bout du monde ("The Lighthouse at the End of the World") by Jules Verne. The story is set in 1865, on a remote island at the southern tip of South America. Will Denton (Kirk Douglas), seeking escape of his troubled past, works on a lighthouse together with aged sea dog Captain Moriz (Fernando Rey) and young Felipe (Massimo Ranieri). One day a pirates ship under the command of Jonathan Kongre (Yul Brynner) appears near the island. Pirates capture the lighthouse and extinguish the light in order to mislead ships into the rocks and loot the cargo. Denton manages to hide in the caves and teams with a wreck survivor Montefiore (Renato Salvatori). The two try to survive and spoil pirates plans to lure more ships in the trap.

The following weapons were used in the film The Light at the Edge of the World:

Kongre holds his revolver in the final scene.

Another view of Kongre's revolver.

The mother-of-pearl or ivory grip is seen.

Some pirates carry Percussion Cap Pistols of several models (though most pirates are armed only with swords, daggers and polearms of various kind). Also a pair of percussion cap pistols is seen in the storeroom of the lighthouse. 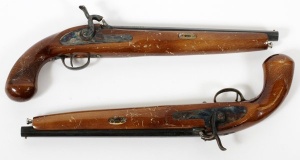 A pair of pistols is seen in the gun rack together with a pair of Remington Rolling Block Carbines.

The grips of these pistols are seen in the gun rack in another scene.

A pirate at the right carries a pistol in his belt.

A pirate at the right carries a pistol in his belt. Note "Bird’s Beak" grip of the gun.

A pirate holds a Pinfire Double Barreled Pistol when he unsuccessfully tries to capture Denton and Montefiore on his own. Denton takes this pistol and uses it later.

A pirate finds Denton's hideout and breaks into the cave with his double barreled pistol in hand.

Denton draws the pistol in the night scene.

In the flashback scene that shows Denton's past during the California Gold Rush both Denton and Matt Edwards (John Clark) draw unidentified revolvers, seen very unclear due to fast motion.

Matt draws his revolver during the quarrel in saloon.

Matt is shot and drops his gun.

Two flare pistols are stored in the lighthouse. Montefiore (Renato Salvatori) takes one of them, that appear to be a highly anachronstic Webley & Scott No. 4 Mk. I. 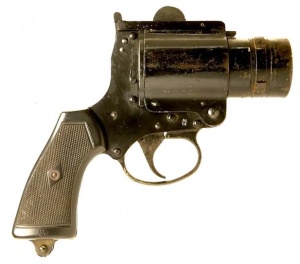 Denton takes two flare pistols from the strongbox in the lighthouse.

Montefiore takes one of these guns and several flares.

The flare pistol is seen in Montefiore's hands.

Montefiore fires the flare pistol. It is seen partially but clear enough for identification.

Denton rests with his carbine next to him, when hunting on a deer.

Denton fires at a deer.

Denton puts the carbine into the gun rack. Two more carbines and two pistols are seen in the rack.

Denton try to get a carbine from the rack during pirates attack but guns are locked.

Due to a continuity error, the full-length rifle, taked by Denton from a slain pirate, switches to a carbine.

Denton fires the carbine to deliver the mercy stroke to Montefiore who is captured and brutally tortured by pirates.

Agrentine sailors hold rifles in the opening scene. These guns are seen only in distance but their general shape resembles Remington Rolling Block.

The rifle of slain pirate on the ground.

Muzzleloading naval cannons are mounted on an Argentine Navy ship in the opening scene and on the pirates ship. In the final scene pirates guns are placed on the island, and Will Denton use them to sink the ship.

A cannon on board of pirates ship.

The barrel of pirates cannon, placed on the island. It is possibly a wooden prop, painted in metal color.

Denton fires a cannon, aimed at pirates ship. When firing, these cannons doesn't have recoil, as real gun of such type would be.
Retrieved from "https://www.imfdb.org/index.php?title=Light_at_the_Edge_of_the_World,_The&oldid=1514336"
Categories: