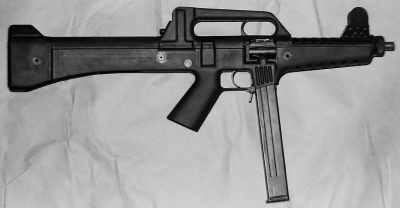 The SM Modelo 3 ("SM" standing for Submetralhadora, which translates to "submachine gun") was designed from 1975 to 1978 in Brazil, and manufactured by LAPA (Laboratório de Projetos de Armamento Automático, Automatic Weapons Project Laboratory). It was presented to the Brazilian Army, who ran 6,500 rounds through it in a series of tests in September 1982. The weapon passed the tests and won the coveted ReTEX report in 1992 (Relatório Técnico Experimental No. 995, Experimental Technical Report No. 995). The army lost interest due to LAPA not responding to their communication attempts, and LAPA went bankrupt after not being able to find any other buyers.

The weapon is a simple blowback 9x19mm submachine gun with a polymer construction, making it fairly light. It fires at 500 RPM from a 30-round magazine. An earlier version of the magazine was curved instead of straight.

The LAPA SM Modelo 3 and variants can be seen in the following films, television series, video games, and anime used by the following actors: