The following weapons were used in the television series The Kitchenblock:

The Nagant M1895 appeares in the hands of several characters.

A White Army officer (Vladimir Butenko) aims his Nagant after firing it during the prologue set during the Russian Civil War (Ep. 01).

A Red Army soldier raises his Nagant at a White Army officer after the latter turns into a ghoul. Note the correct pre-1930s front sight (Ep. 04).

The NKVD officer (at the left) pulls his Nagant during the prologue set in 1934. Young Serp (Roman Evdokimov) carries a holstered Luger at the right (Ep. 04).

The NKVD officers (played by Andrey Artasov, Andrey Zakopailo and Ivan Tartarashvili) aim their Nagants at ghouls, while the militsioneer at the background left aims a Mosin Nagant rifle (Ep. 04).

The NKVD officers and militsioneer fire their guns at a ghoul (Ep. 04).

A White Army officer holds the unloaded Nagant during the Russian Civil War prologue. Young Serp holds him at gunpoint with the Mosin Nagant rifle (Ep. 07).

Serp Ieronov (Sergey Shakurov) owns a Luger P08. At several points, his pistol is briefly seen in the hands of several other characters.

Valerka tries to disarms Igor of his Luger (Ep. 07).

Numerous characters can be seen using a Mosin Nagant M91/30s.

The militsioneer aims his Mosin Nagant at a ghoul in 1934. The NKVD officer at the right fires a Nagant revolver (Ep. 04).

The militsioneer hits the ghoul with the buttstock of his Mosin Nagant (Ep. 04).

The prison guards carry Mosin Nagant rifles during the 1934 prologue. A moment later, their guns turns into M44 carbines (Ep. 07).

Mosin Nagant M44 Carbine, with attached side-folding bayonet - 7.62x54mmR. Note the slightly longer barrel ahead of the front sight to accommodate locking in the bayonet, brass reinforcements around the sling holes and an integral bayonet attached to the barrel.

Note the turned-down bolt handle, a sign of rework into a KO-44 hunting rifle (Ep. 07).

A White Army officer (Vladimir Butenko) fires a Maxim M1910 during the prologue set during the Russian Civil War.

A slightly different view of the Maxim (Ep. 01).

The operating handles of the Maxim is seen (Ep. 04).

When the pioneers play the game Zarnitsa in Episode 6, they are armed with wooden toy guns.

The pioneer runs, wooden pistol in hand. This wooden gun has a passing resemblance to a Luger pistol.

A 76 mm (3-inch) divisional gun M1902 can be seen during the Russian Civil War prologue. 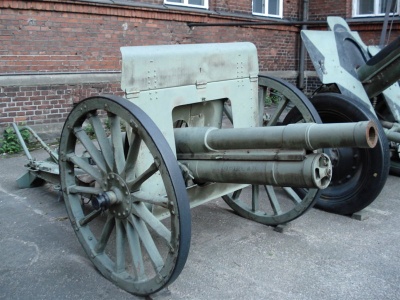 When the The Elusive Avengers is shown at the cinema in Episode 3, numerous guns are seen on the cinema screen.