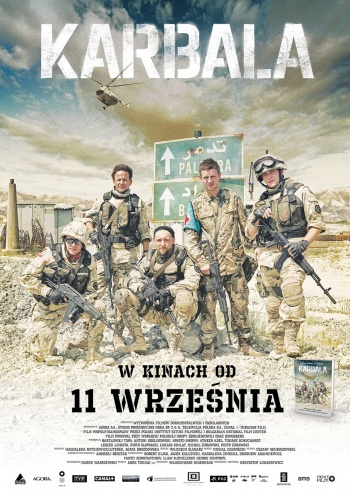 Karbala is a 2015 Polish war film, directed by Krzysztof Łukaszewicz. It dramatizes the Defense of the Karbala City Hall, an engagement during the Iraq War in 2004. 40 Polish and 40 Bulgarian soldiers find themselves under siege by a large force composed of Mahdi Army militants, leading to a defense of the city hall of the Iraqi city of Karbala.

The following weapons were used in the film Karbala:

The guerrilla leader uses a Glock 17.

One of the guerrillas is armed with an IMI Uzi.

Most of the guerrillas are armed with the AK-47.

Bulgarian Special Forces operatives are armed with the AKMS, as are Iraqi police officers.

One of the Polish soldiers is armed with a railed wz. 96A Beryl fitted with what appears to be an EOTech 512 or 552 holographic sight.

Ditto. The rail used is the POPC III, indicated by its lower rail walls (which block off the iron sights). The EOtech holographic sight might be historically inaccurate as military EOTechs were introduced in 2001 and by 2004-2005 were still being in the process of adoption by the US forces and it is unknown if they were used by anyone else around that time.

One of the guerrillas is armed with an SVD Dragunov.

A young guerrilla is armed with an RPG-7.

The SPG-9 recoilless rifle is the standard anti-material firearm of the Polish Army.