From Internet Movie Firearms Database - Guns in Movies, TV and Video Games
Revision as of 19:50, 30 September 2021 by Greg-Z (talk | contribs) (→‎Henry 1860 (Denix Replica): As it's a Denix, let's use the sample image of a Denix)
(diff) ← Older revision | Latest revision (diff) | Newer revision → (diff)
Jump to navigation Jump to search

Jane Got a Gun is a 2016 Western directed by Gavin O'Connor (The Accountant). The film follows Jane (Natalie Portman), a woman who must defend her family from a vicious gang who seriously wounded her husband. The film is notable for reuniting Natalie Portman, Ewan McGregor, and Joel Edgerton (who also co-wrote the script), three cast members from the Star Wars Prequel Trilogy.

The following weapons were used in the film Jane Got a Gun (2016):

The Colt Walker 1847 is the main sidearm of Jane (Natalie Portman) and her husband Bill "Ham" Hammond (Noah Emmerich) throughout the film. Bill Hammond keeps two of the massive revolvers, both of which have been converted to accept .44 metallic cartridges. Jane loads both Walkers in the beginning of the film, keeping one for herself and leaving the other for her husband. Fitchum (Rodrigo Santoro) recognizes the Walker Jane is carrying holstered, noting that it's a particular model of firearm and Bill Hammond's weapon of choice. In a continuity error, Jane is seen practicing with her revolver, which switches back and forth between a Walker and a Single Action Army.

Colt Walker 1847 used by Clint Eastwood in the The Outlaw Josey Wales, which was converted to fire metallic cartridges like the ones in the film.

Jane (Natalie Portman) loads one of Bill's two Colt Walkers in the beginning of the film.

Jane sets the Walker on a chair by Bill's bedside.

Jane practices shooting. The Walker seen here switches back and forth with a Single Action Army.

Bill Hammond (Noah Emmerich) pulls both of his Walkers in a flashback.

Bill's inner Josey Wales comes out as he storms through the whorehouse.

Dan Frost (Joel Edgerton) carries a matching set of Colt 1860 Army (Richards-Mason Conversion) revolvers throughout the film. This is true to the time period, as the Single Action Army didn't begin production until around two years after the events of the film (which takes place in 1871). However according to Wikipedia Richards and Mason were granted the patent for the cartridge conversion in 1871 and actual production did not begin until 1873. However such historical nitpicking doesn't detract from the fact that the production made an effort to use a more period correct revolver.

Colt 1860 Army with Richards-Mason cartridge conversion. Note that this version has a shorter barrel than the ones seen in the film.

Dan Frost (Joel Edgerton) tucks one of his cartridge-converted 1860s in the back of his belt.

Frost cocks his revolver. Note the cartridge cylinder and loading rod under the barrel, indicating a conversion model.

Frost keeps his revolver at the ready during the final shootout. Note how there is no rear iron sight notch, differentiating a Richards-Mason conversion from a Richards conversion.

Frost with his revolver.

Fitchum (Rodrigo Santoro),who assaults Jane near the beginning of the film, carries what appears to be a standard cap-and-ball Colt 1860 Army.

Fitchum holds what appears to be a standard Colt 1860 without a cartridge conversion. Note the cylinder, which has notches for percussion nipples, and the ramrod still mounted under the barrel.

Fitchum makes an obscene gesture with his Colt, which is not recommended with the weapon cocked and a finger on the trigger.

Fitchum holds his 1860 on Jane with one hand and pulls a double-action Starr with the other when confronted by Frost and his Henry.

Fitchum (Rodrigo Santoro) also pulls a Starr 1858 Army revolver when confronted by Dan Frost and his Henry rifle. While it is obviously a double-action Starr, Frost mistakenly refers to is as a "Colt" when suggesting that Fitchum lower his weapons. 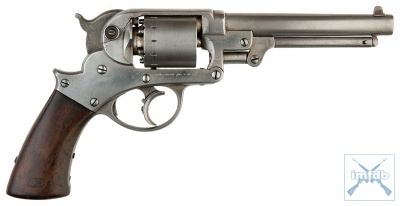 An excellent view of the Starr.

During a flashback, John Bishop (Ewan McGregor) shows Dan Frost a brass-framed Remington 1858 with ivory grips sporting Confederate "CS" medallions, which Bishop says belonged to General Beauregard who carried it at the Battle of Shiloh (1862) and calls it "the prize of his collection." There are two things worth noting here: 1) The Remington shown in the scene has a brass frame, which was never produced in original models and is a feature exclusively seen in modern reproductions. 2) General P. G. T. Beauregard was actually known for carrying a LeMat, and also being an official backer of Jean Alexander Le Mat's design. Bishop later wields the revolver alongside a Colt 1860 Army in the climactic shootout.

John Bishop (Ewan McGregor) shows Dan Frost his prized Remington 1858. The brass frame indicates that this is a modern reproduction, as brass-framed Remingtons were never produced.

Frost looks over the Remington.

Bishop holds the Remington on Frost, offering a good view of the brass frame.

Bishop holds his Remington during the climax. Despite the fact that Bishop stated that the Remington was the prize of his collection, he still carries it during a shootout. Using cherished artifacts in combat isn't highly recommended, particularly those that belonged to generals.

Despite being the star of most westerns, only one Colt Single Action Army is seen in the film. When Jane practices shooting with Dan Frost, she misses hitting an ax handle with 5 shots from her revolver. In a continuity error, this gun switches back and forth between the Single Action Army and the Colt Walker Jane carries earlier in the film. Jane carries the revolver for the rest of film following this scene, holding it on John Bishop (Ewan McGregor) during the film's climax. It's unclear why Jane switches to this firearm, but it's likely that the Single Action Army would simply be more manageable in her small hands then the immense Walker. The Single Action Army is also an anachronism by around two years, as the film takes place in 1871 and the gun didn't enter production until around 1873.

Jane cocks her revolver as she aims it at John Bishop's head in the film's climax.

Frost owns at least one Henry 1860 lever-action rifle, using it when seeing Jane in the beginning of the film and when confronting the Bishop gunman who tries to kidnap her. Jane also uses either a second or the same Henry while practicing her target shooting, using it to blast an ax handle in half after missing it with her revolver. Jane and Frost then both use Henry rifles to great effect during the climactic shootout. It's worth noting that while some western films have used brass-framed rifles such as the Winchester 1866 "Yellow Boy" with the fore-ends removed to represent Henrys, the rifles in this film are replica Henry 1860 rifles made by Denix which can be determined by the lack of a loading gate on the receiver and spring follower under the magazine tube.

After missing her target with her revolver, Jane picks up a Henry and hits home on the first shot.

Frost readies his Henry moments before the final shootout.

During the flashback in which Bishop shows Frost his Remington revolver, at least one Kentucky Flintlock Rifle can be seen hanging on the wall of his office. The rest of them are too obscured to accurately identify.

The rifles (circled in red) are seen hanging in Bishop's office, presumably part of the collection he mentioned when discussing the Remington revolver. At least one of these rifles is a Kentucky Flintlock Rifle, but the others are seen too briefly to identify.
Retrieved from "https://www.imfdb.org/index.php?title=Jane_Got_a_Gun_(2016)&oldid=1445758"
Categories: