The following weapons were used in the film Ghouls (Vurdalaki):

A Flintlock Pistol can be seen hanged on the wall in the Spass Monastery. It's possibly, a non firing replica.

A flintlock pistol can be seen under the rifle.

Milena (Aglaya Shilovskaya) fires Charleville Musket at the one scene. Georges (Konstantin Milovanov) holds it during the chase.

Milena holds a musket after firing it.

Another view of Milena's musket.

A close view of the flintlosck.

A Turkish man (Igor Khripunov) fires Moukhala Musket during the chase. Milena tooked it for herself. Another (most likely, the same movie prop) Moukhala Musket can be seen hanged on the wall in Vitold's castle. 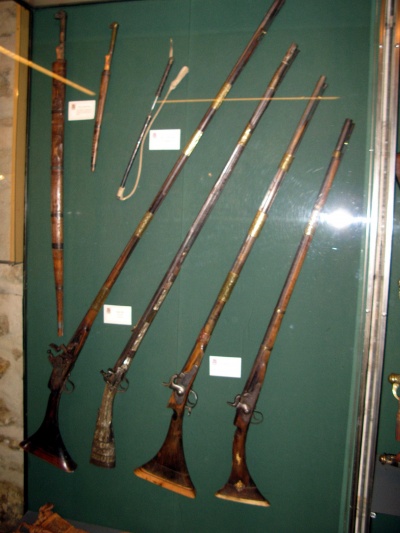 Musket is seen tyced on the cart. Note the typical shape of the buttstock.

A Turkish man grabs the musket.

...and press the trigger, Mote the hammer moving.

A Turkish man holds the musket after firing it. Note the lack of ramrod, which was lost previosly.

A perfect view of the buttstock and flintlock.

Musket can be seen hanged on the wall.

An unknown rifle can be seen hanged on the wall in the Spass Monastery. It's possibly, a non firing replica.

A rifle can be seen above the pistol.

A light cannons can be seen in the Spass Monastery. Most likely, the single movie prop was used.

A cannon can be seen at the background.

A perfect view of the cannon.
Retrieved from "https://www.imfdb.org/index.php?title=Ghouls_(Vurdalaki)&oldid=1383091"
Categories: