Enforcement is a 2020 Danish movie directed by Frederik Louis Hviid and Anders Ølholm. The Copenhagen police face serious accusations of racism: After a brutal operation, 19-year-old Talib Ben Hassi is in a coma with serious injuries. Particularly in the high-rise housing estate Svalegården, anger against the state power is growing. That's where police officer Mike Andersen and his new partner Jens Høyer set off on their first patrol together. During an arbitrary identity check, he humiliates the teenager Amos Al-Shami on the street without Høyer intervening. When Amos attempts to escape and news of Talib's death spreads, the violence suddenly turns against the law enforcement officers. A gang begins a manhunt for the officers, who rely on the help of Amos, who knows the area, to escape.

The following weapons were used in the film Enforcement:

All Danish police officers including Mike Andersen (Jacob Lohmann) and Jens Høyer (Simon Sears) have Heckler & Koch USP Compact pistols. Most of them are seen holstered.

Jens takes his USP which is equipped with a flash light.

After firing several shots at the chaser, Mike holds his pistol.

Some insurgents can be seen with unknown pistols.

The insurgents take cover from a burst of Mike's carbine.

A Danish police sniper at the beginning and Mike Andersen use Colt Canada C8 Carbines, known as the Gevær M/10 in Danish service.

The carbine of the sniper.

A close-up of the scope and stock.

While pinned down by the insurgents, Mike unpacks his carbine from a back.

He charges his carbine.

Firing the carbine at the insurgents.

Mike reload his gun while advancing.

Mike confronts an unknown person with his carbine.

An unknown Sniper Rifle is used by a resident of an apartment.

The resident fires his sniper rifle.

One of the insurgents wields a Webley & Scott No. 2 Mk. V flare gun. 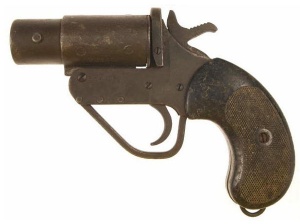 The insurgent points the flare fun on Jens' face.

A front view of the insurgent.

Jens is now in control of the flare gun.

An Airsoft Glock pistol is owned by Amos Al-Shami (Tarek Zayat) which is taken by Mike Andersen. 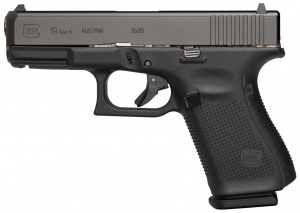 The airsoft pistol lies on its box.

The box cover is seen after Mike took the pistol.

Another view of the airsoft pistol lying next to Mike fighting with a dog.
Retrieved from "https://www.imfdb.org/index.php?title=Enforcement&oldid=1512194"
Categories: