Do Not Wake Me Up (Ne budi menya)

Do Not Wake Me Up (Russian Не буди меня; Ne budi menya) is a 2020 Russian science-fiction movie, directed by Vladimir Romanov (Treasures of the Twelve Gods (Sokrovishcha dvenadthati bogov)).

The following weapons were used in the film Do Not Wake Me Up (Ne budi menya):

Numerous characters use Reck Agents throughout the movie. 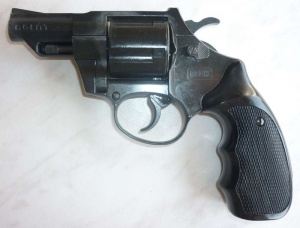 The Inspector's police advisor (Sergey Osipenko) tries to pull his duty revolver, which is captured from him by Ray (Vitaliy Krivonos).

Ray pulls the revolver to threaten Martha (Olga Yakovleva) and her henchmen (played by Vladislav Shkerin and Andrey Fadeev).

Ray tucks the revolver into his waistband.

The Inspector examines a photo while holding the revolver. The barrel is seen.

Ray in cover, revolver in hands.

Ray pulls his revolver at the Police Inspector.

The Makarov PM is a very popular firearm in the movie.

The Inspector's police advisor tries to use his pistol.

A side view of the Inspector's pistol.

The Inspector tries to raise his pistol...

...but Ray kicks the gun from his hand.

The commander (Arsen Izrailov) grabs his pistol from the desk drawer.

One of the Forsad troopers holds the pistol.

At least one guard carries a holstered Glock 17.

Two guards jokingly fight. The one at the left carries a holstered pistol.

A slightly different view of his pistol.

The bartender (Roberto Fleites) tries to threaten Ray (Vitaliy Krivonos) with a Saiga 12, but Ray immediately disarms him.

The bartender grabs his gun...

Ray holds bartender at gunpoint with his own gun.

The stock is seen from afar.

Ray removes the mag of the gun.

The Police Inspector (Anton Kolesov) fires a suppressed SR-25 at one point.

The Police Inspector holds the rifle.

A closer view of the mag.

The Inspector raises his rifle again...

A closer view of the suppressor.

A guard unslings his rifle...

Dan (Anton Taubin) leans his AK rifle on a chair.

A Forsad trooper (at the background) holds the rifle.

Most of the Forsad troops as well as several clinic guards carry AK-103s. Most of them are equipped with AKS-74 folding stocks, which were only seen on early rifles, so they are most likely older models fitted with new black furniture.

The guard holds the rifle.

The guard at the right puts his AK rifle near the wall.

An AK rifle is seen in the hands of Forsad troops.

The head guard (Roman Silvanovich) puts the rifle against the wall.

The rifles are aimed by Forsad troops.

The AK's muzzle is seen.

Several clinic guards can be seen armed with the Saiga MK-03.

Two guards jokingly fight. The one at the left carries an AK rifle.

A better view of his rifle.

The guard aims his rifle.

A Forsad trooper raises the rifle.

The rifle is seen in the guard's hand.

A Forsad trooper holds the rifle, captured from a guard.

The Forsad sniper (Evgeniy Pavlov) fires a VSS Vintorez at the film's climax.

The Forsad sniper aims his rifle.

A Bren gun without a magazine is seen on a poster at one point.

Bren Mk1 (M) - .303 British. Simplified version with no grip or butt strap on the stock and with dovetail mount on the left side of the receiver deleted, and a slightly different flash hider

The poster (at the left) depicts a woman with the machine gun in hands.
Retrieved from "https://www.imfdb.org/index.php?title=Do_Not_Wake_Me_Up_(Ne_budi_menya)&oldid=1496941"
Categories: