The Deer Hunter is a 1978 Vietnam War film co-written and directed by Michael Cimino. The film follows a group of friends from a small Pennsylvania working class town through their harrowing experience serving as soldiers during the Vietnam War and how it comes to affect them upon their return to the United States. The film, which would go on to receive Academy Awards for Best Picture and Best Director, did encounter controversy for its graphic depiction of Russian roulette. The cast includes Robert De Niro, John Savage, Meryl Streep, and Christopher Walken, who received the Academy Award for Best Supporting Actor for his role in the film.

The following weapons were used in the film The Deer Hunter:

A Colt Detective Special is used in the initial Saigon Russian roulette match observed by Nick (Christopher Walken). The ejector rod shroud that is unique to the 3rd Generation DS is visible on the revolver being used.

A man holds the Colt Detective Special in the nightclub. The ejector rod shroud is clearly visible.

The first entrant clicks the Colt Detective Special empty on himself.

Nick takes the Colt Detective Special from the first man and clicks it empty on the second man forcefully, before clicking it empty on himself.

When Michael (Robert De Niro) returns to Saigon to search for Nick (Christopher Walken), the revolver being used in the Russian Roulette matches is now a Smith & Wesson Model 36. Since the Model 36 is a 5-shot revolver, the chances of shooting one's self is now 1/5, instead of a 1/6 chance (as with a 6-shot revolver).

The man loads one bullet in the Smith & Wesson Model 36 as Michael (Robert De Niro) confronts Nick at the nightclub.

Michael's turn to take it and pull the trigger. The S&W J-frames 5-shot cylinder and trigger guard are visible.

Nick takes it again, and pulls the trigger.

Following the wedding when the men get ready to go hunting, Stan (John Cazale) is seen pulling a Smith & Wesson Model 10 with a 2" barrel and nickel finish. What appears to a different firearm is seen from the latter part of the movie. See the quote in the fourth screencap. Axel takes a Smith & Wesson Model 10 revolver with 2" barrel out of Stan's waistband to show Michael. Later in the hunting cabin Stan threatens Axel with it, and Michael takes it from him and puts one round in the cylinder, clicking it empty against Stan's head. (Trivia: According to the director, De Niro requested a live bullet to be used in this scene to heighten the sense of danger. John Cazale, who played Stan, did not protest, yet compulsively and understandably checked that the bullet was not next in the chamber for the scene.) 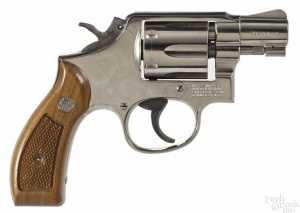 Stan holding his revolver in the first part of the movie.

Another shot of Stan's revolver.

Yet another shot. Is this a blued model?

Michael - "What's that for?"
Stan - "The same thing the other one was for."
Axel holding Stan's nickel Model 10 revolver. This may be a different revolver than the one Stan had in the first part of the movie. According to the quote above, it's a different gun.

Stan points his loaded nickel Model 10 at Axel with the hammer cocked. That's not a very nice thing to do to your friend.

Michael unloads Stan's Model 10 , proving it was loaded whereas Stan claimed it was unloaded.

"You want to play games?"
Michael puts one round in Stan's revolver, leaving 5 empty chambers.

"How do you feel now? Huh? HUH? BIGSHOT?"
Michael puts Stan's nickel Model 10 to his head, clicking the gun empty on him.

The Viet Cong soldiers order the POWs to play Russian roulette with a Smith & Wesson M&P revolver. Michael (Robert De Niro) notably uses it when he asks the Vietnamese soldiers to load three bullets in the gun, which he then uses to kill three soldiers and uses their weapons to dispatch the rest. It's identified as a Pre-Model 10 M&P from its hammer configuration. That is what is known as a "Long-Action" M&P. The "Long Action" was phased out in 1948. Smith & Wesson did not start numbering the models until 1957. By then, the "Short Action" with the re-designed hammer was standard on all models.

A Vietnamese POW holding a Smith & Wesson M&P to his head moments before he shoots himself dead. Going by the symbols on his collars, this is an Army of the Republic of Vietnam (ARVN) Captain. His "opponent" is a ARVN Colonel.

Stevie (John Savage) holds the M&P to his head.

The M&P on the table.

Another shot of the M&P on the table.

Nick holding the M&P to his head.

Michael laughing as he holds the M&P moments before turning it against the Viet Cong, shooting three of them.

American MPs at the Saigon Military Hospital carry what appear to be M1911A1 pistols in their holsters.

American MPs with their holstered pistols.

What appears to be a toy Single Action Army is held by a child in this scene.

A child points a toy Single Action Army at Michael.

The ARVN Lt. Colonel is seen with a holstered revolver, most likely a Smith & Wesson but due to lack of screen time, it's impossible to tell.

A 12 Gauge Double Barreled Shotgun is seen on the rifle rack in Michael's house.

A shotgun at the top of the gun rack in Michael's house.

A front view of the shotgun.

The rifle on the gun rack in Michael's house is a Remington Model 760 pump rifle.

A Remington Model 760 (below the double barreled shotgun) is seen on a gun rack in Michael's house.

A front view of the Remington Model 760 on the right.

Remington 700 BDL rifles are used by the members of the hunting party. Michael (Robert De Niro) notably carries a left-handed model. Interestingly, De Niro shoots right-handed when using a handgun (particularly in the famous Russian Roulette scenes) and when using the flamethrower. He switches to left-handed with the Remington 700, as well when using the M16A1. Cross-dominant shooters will often switch sides when using long guns, in order to be able to aim with their dominant eye when shouldering the weapon.

Michael holding his Remington in his house.

Michael looking at his left-handed Remington with the bolt open.

Michael right after shooting a deer with his Remington.

A rifle is seen leaning against a counter in Michael's house.

Another shot of the same rifle.

Nick with his Remington when him and Michael go hunting.

A close up of Michael's rifle late in the movie.

M16A1 rifles are carried by Nick (Christopher Walken) and Steven (John Savage) while serving in Vietnam. Michael (Robert De Niro) notably uses one to finish off an NVA soldier after setting him on fire with a flamethrower. Many US soldiers carry them as well when Michael returns to Saigon to look for Nick.

Michael with his M16A1 after finishing off a Viet Cong.

Michael, Nick, and Stevie with their M16A1s.

Nick and Stevie walking with their M16A1s.

A standing ARVN soldier on the left appears to have an M16A1. The officer is a ARVN Lt. Colonel.

A man in the background at the nightclub when Michael tracks down Nick appears to have an M16A1.

A US soldier is seen carrying what appears to be an XM177E1 carbine upon exiting a helicopter. The footage appears to be actual documentary footage from the war so it's likely the real thing.

A US soldier is seen carrying what appears to be an XM177E1 rifle upon exiting a helicopter. The footage appears to be actual documentary footage from the war so it's likely the real thing.

Norinco Type 56 rifles are used by the Viet Cong. Michael (Robert De Niro) and Nick (Christopher Walken) both take one from their captors during the Russian Roulette scene and use them to dispatch the remaining Viet Cong.

A Viet Cong with an Norinco Type 56.

The ARVN Captain held up by a Type 56 wielding Viet Cong moments before his death.

Stevie held by the Viet Cong with an AK-47 and a Norinco Type 56 as they persuade him to put a revolver to his head.

A Viet Cong right before he shoots at the prisoners with his Norinco Type 56.

A shot of a Norinco Type 56 just as Michael shoots a Viet Cong in the head. Here the blood squib can clearly be seen.

Nick swoops in and disarms a Viet Cong of his Norinco Type 56 when Michael starts shooting.

Michael with his captured Norinco Type 56.

A shot of a Norinco Type 56 next to a dead Viet Cong after the firefight.

A Viet Cong forcing the ARVN Colonel to hold a revolver to his head using his AK-47.

Close up of the receiver on one of the AK-47s.

A Viet Cong with his AK-47 moments before shooting Nick in the leg. Note the front sight which distinguishes this model from the Norinco Type 56 which has a hooded sight.

A US helicopter that manages to save Nick (Christopher Walken) has two M60 machine guns mounted on it. An ARVN jeep that stops for Michael and Stevie has an M60 mounted on it as well. M60s are also seen atop the US embassy during the Fall of Saigon.

An M60 mounted on the left side of the helicopter that saves Nick.

A soldier firing the M60 on the ride side of the same chopper.

An ARVN soldier mans the M60 on a jeep when Michael leaves Stevie in the care of some soldiers.

An M60 mounted on a jeep. Michael lays Stevie on the hood of this jeep, he must have thought they were Stevie's only hope for survival.

A Browning M1919A4 is seen mounted on a US Army Jeep when Michael Vronsky (Robert De Niro) returns to Saigon to bring back Nick.

An M2 mounted on an APC.

Michael using the flamethrower to dispatch a Viet Cong.

Michael turning off the flamethrower after killing a Viet Cong.

A PAVN regular holding the Type II grenade moments before throwing it in the hole.
Retrieved from "https://www.imfdb.org/index.php?title=Deer_Hunter,_The&oldid=1530289"
Categories: