Charlize Theron holds a Glock 22 as Ashley in Reindeer Games (2000). 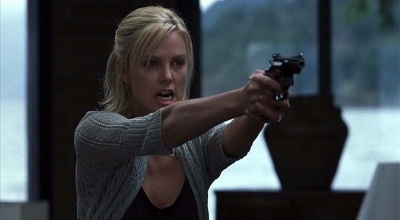 Charlize Theron (b. 7 August 1975) is a South African model and actress well known for roles in such films as 2 Days in the Valley, Prometheus, Mad Max: Fury Road, The Italian Job (2003) as well as her Oscar and Golden Globe-winning performance as serial killer Aileen Wournos in the film Monster (2003). In real life, Theron is a fierce anti-gun activist, which she attributes in part to the traumatic death of her father when she was 15: her father Charles (for whom she was named) went on a drunken shooting spree inside their home, and was shot and killed by her mother, Gerda, in defense of herself and Charlize.