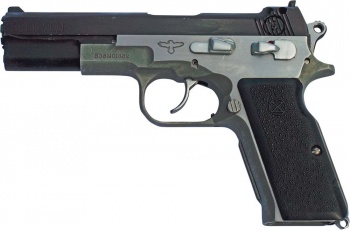 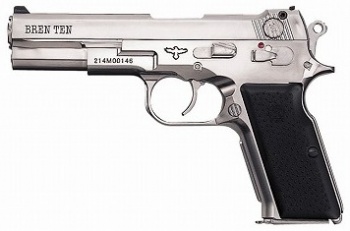 The Bren Ten was a semi-automatic pistol designed around a new, more powerful round - the 10mm Auto - by Dornaus and Dixon, Inc. The gun was a bigger and a stronger version of the 9x19mm CZ-75. Col. Jeff Cooper was the design consultant, adding many changes to the original design, such as making the recoil spring guide also a screwdriver to fit the pistol's screws. The Bren Ten was produced only in small numbers before the company went bankrupt, and many owners received the pistol without magazines.

Miami Vice and the Bren Ten

The Bren Ten is perhaps most notable for having been Sonny Crockett's pistol in the television series Miami Vice. He carried it in the first and second seasons of the show - excluding the pilot episode, where he used a SIG-Sauer P220 - from 1984 to 1986. The two Bren Tens used in the show were customized, applying chrome to the slide in order to make it more visible during night scenes. (Reportedly, the guns were altered to fire .45 ACP blanks, a modification that led to numerous malfunctions during filming.)

The gun is considered a collector's item. Due to the TV-series it has become popular for owners to give the Bren Ten the "Miami Vice treatment". "Miami Vicing" a Bren Ten consists of taking a full-sized Standard Model and hard chroming the pistol's slide to replicate the finish of the gun used by Sonny Crockett (Don Johnson) on the iconic television series. This is a relatively simple process and nothing else is required to duplicate the 'Miami Vice' Bren Ten.

The Bren Ten and variants can be seen in the following films, television series, video games, and anime used by the following actors: