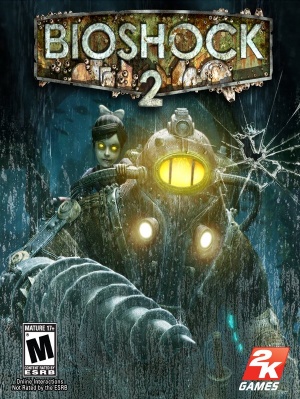 The following weapons make an appearance in the video game BioShock 2:

A gold-plated Luger P08 Artillery model is given to Subject Delta to shoot himself by Sofia Lamb when he is hit with a Hypnotize plasmid by one of Lamb's Splicers in the game's opening cutscene.

The long barreled "Artillery" model of the Luger P08 - 9x19mm 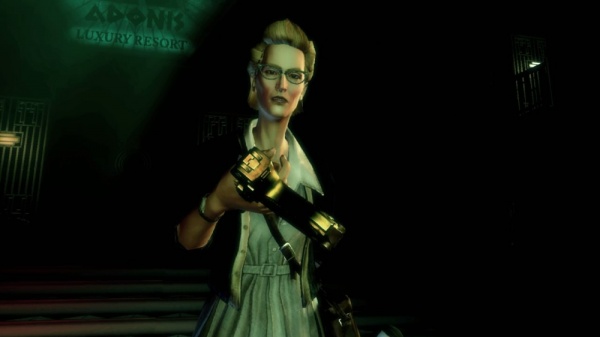 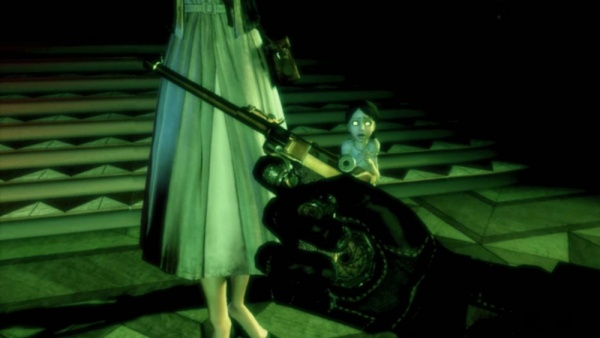 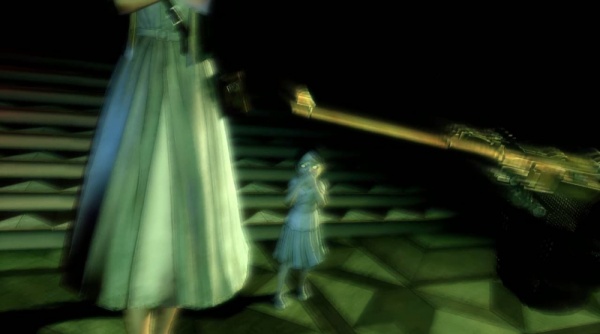 ...Before blowing out his brains with it. Notice how the Luger is gold-plated and has had the trigger guard removed.

The Webley Mk VI is the weapon commonly used by the Leadhead Splicers in the early levels. Is not usable by the player except in multiplayer. 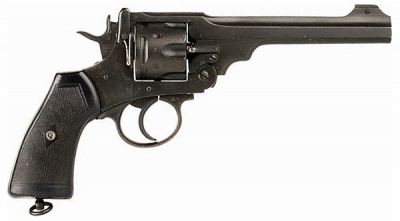 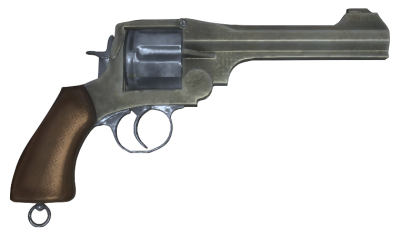 The "Pistol" as it appeared in Bioshock. Both games use the same model. 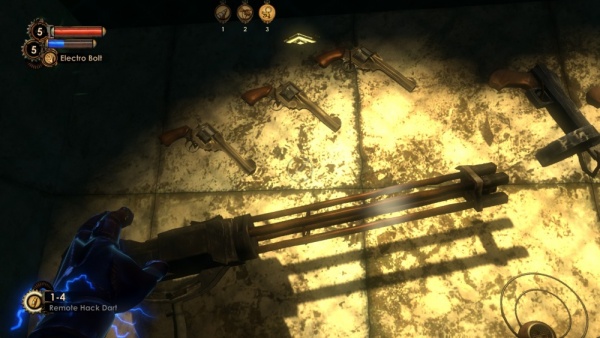 A few Webleys in a closet, with a .50 Cal Machine Gun and three Tommy Guns. 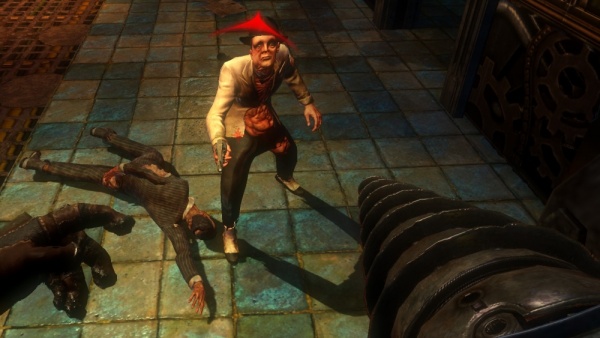 A Splicer aims at Subject Delta with his revolver.

The Thompson Submachine Gun is used by many of the the Leadhead Splicers after the first few levels. It has the butt-stock and fore-grip removed. Not usable by Subject Delta, however it is selectable in multiplayer. The Thompsons incorrectly use what is presumably .50 BMG rounds in this game (They clearly would not fit in the magazine) and have no stocks. Your guess is as good as mine how this would work.

The version used in the multiplayer, is analougos to the Jack's SMG from the first game. It keeps 30 rounds in the drum magzine by default (which would actually be a stick magazine). Upgrades include the firing boost, recoil reduction (both of which represent the installation of obscure mechanism pieces on a weapon), and the enlarged magazine, consisting of twin drum mags (resembling the modern Beta C-Mag; the real Tommy Gun just used a big 100-round drum magazine), which nevertheless is only ridiculously increases the capacity up to 40 rounds. 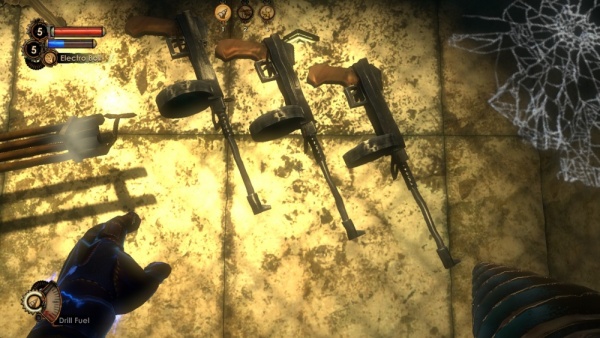 Three Tommy Guns in a closet. Note that the pistol grip and trigger housing were moved to the back of the receiver, which, oddly enough, is very similar to the Thompson No. 8 prototype ([1])

The fifth weapon found in-game. The stock appears to have been torn off, as splinters are visible on the grip. Can be upgraded with dual cylinders for each barrel that hold three shells each, and sawed-off barrels that increase the damage of each shot instead of decreasing it as in real life, which is odd because sawing off the barrels really does not have that much effect on spread. The last modification is the Tesla Upgrade, which randomly deals electric damage after the shots. The shotgun can fire 00 Buck, Phosphorus and Solid Slug shells. The ammo limit is 24 for the 00 Buck, half for the other two. 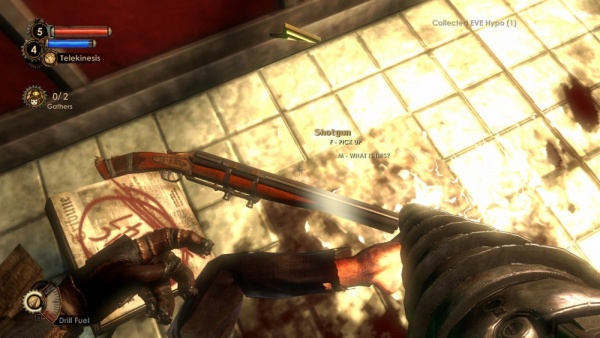 The shotgun on the floor next to a dead Splicer. 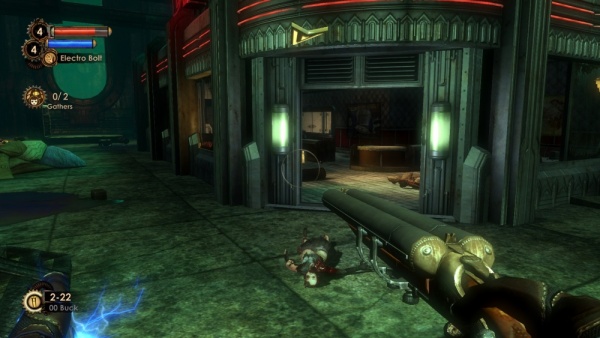 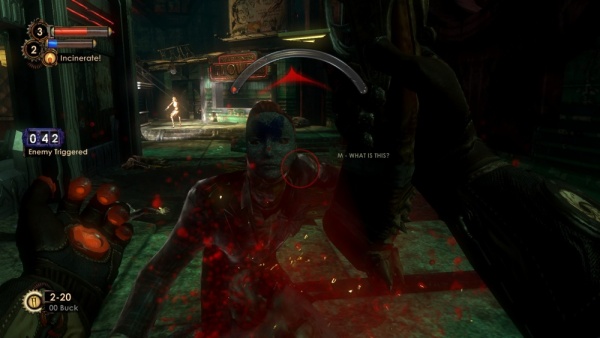 What is this?
This is a Splicer being bashed in the face with a shotgun. The shotgun deals less melee damage than the other firearms. 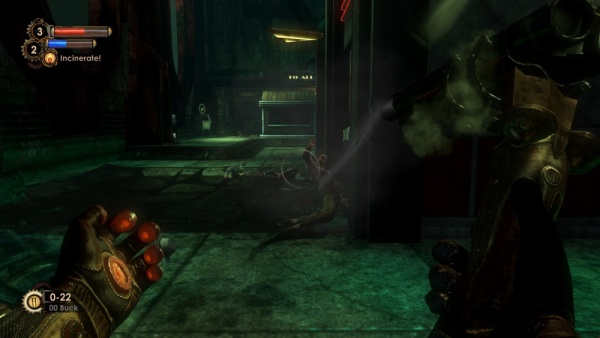 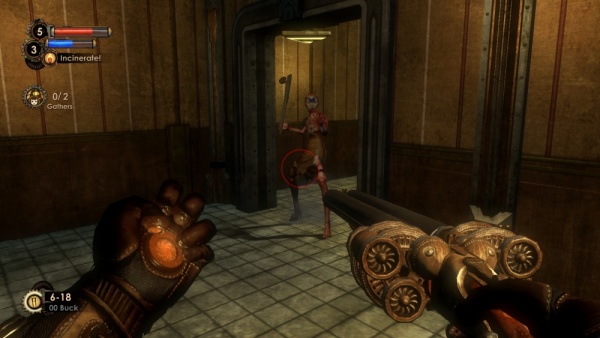 The shotgun upgraded with dual cylinders, which increases the capacity to six shells. 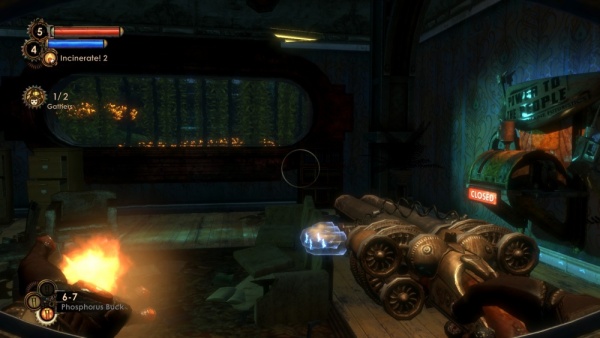 The shotgun fitted with all three upgrades. 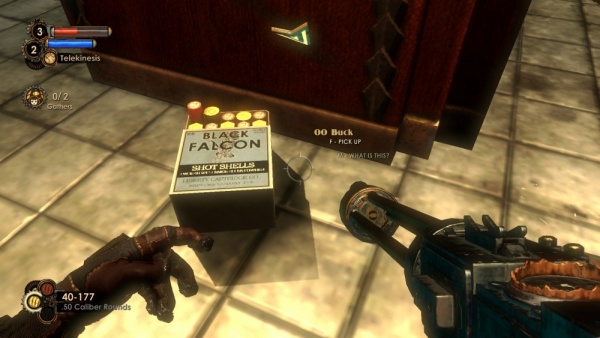 A box of 00 Buck shells, the default ammo type for the shotgun. In the game, one shell costs more than ten .50 caliber machine gun rounds. 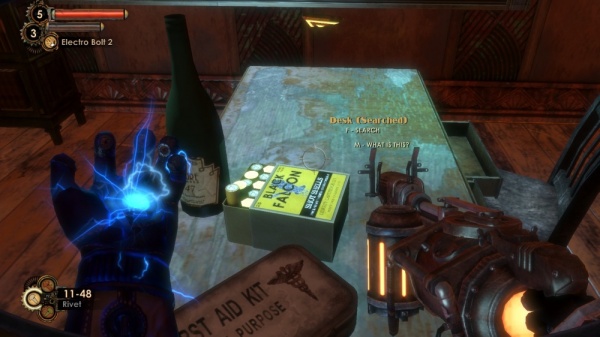 A box of Phosphorus shells, a first aid kit and a bottle of "Tate Merlot" wine on a table. The Phosphorus shells do significantly less damage than the 00 Buck shells, but ignite targets on fire, dealing moderate fire damage overtime.

A vintage Spencer 1882 with ornate golden engravings is used by many of the Leadhead Splicers after the first few levels. Is not usable by the player. It is, however, usable in the multiplayer component. 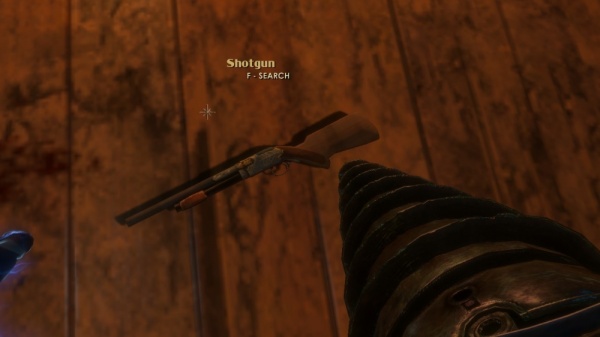 A shotgun on the ground.

Large, double-barreled rifle available only in multiplayer. It is extremely powerful and accurate, but can only hold two shells at a time (four with modification). A scope may be added to convert the elephant gun into a sniper rifle.

'Elephant Gun' as it appears in BioShock 2 Multiplayer

Like in the first game, mounted Browning M1919 machine guns appear frequently in single-player as automated weapons programmed to shoot all hostiles on sight. This weapon also fires .50 caliber rounds, making it easier to refill the ammo for the portable Machine Gun. The Browning also appears in multiplayer, where it remains neutral until one team hacks it. The turrets are called "SMG Turrets". 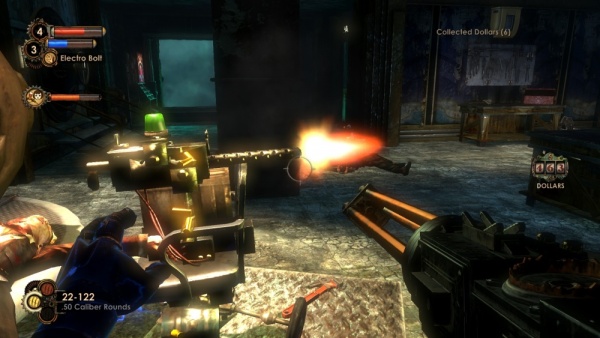 This weapon is found in the second chapter of the game. It is a 4 barreled Gatling Gun that uses .50 caliber BMG rounds. A broken piece of what appears to be a cylinder atop the weapon indicates that it was originally meant to be turret-mounted, but was broken off and converted into a portable weapon. Additionally, while stronger (and with more recoil) than the .45 caliber Tommy Gun aka "Machine Gun" from the first Bioshock, it is still very weak for a .50 caliber weapon as it takes many rounds to kill even a low level Splicer. Another oddity is that Subject Delta can procure .50 caliber ammunition from the .45 caliber "Tommy Guns" in the game, though this is obviously done for gameplay purposes. Alpha Series Big Daddies are usually armed with these machine guns.

The Machine Gun can fire normal, anti-personnel and armor piercing bullets. Can be upgraded with reinforced barrels for increased damage and muzzle compensator for reduced kickback. The last upgrade is the Ricochet Enhancement, which allows the bullets to ricochet off of walls and still cause the same damage. Despite being a decent automatic weapon, it holds only 40 rounds. 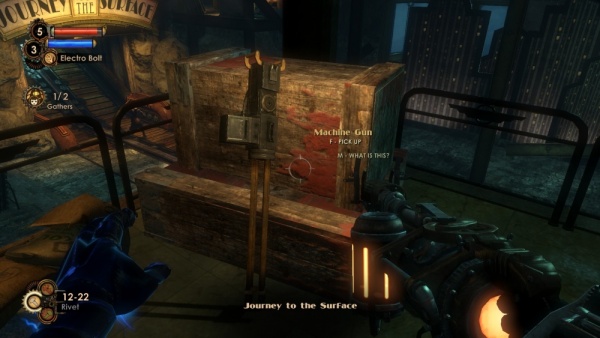 The first Machine Gun Subject Delta encounters at Ryan Amusements. Note that it has spade grips.

Stock Machine Gun without any upgrades. 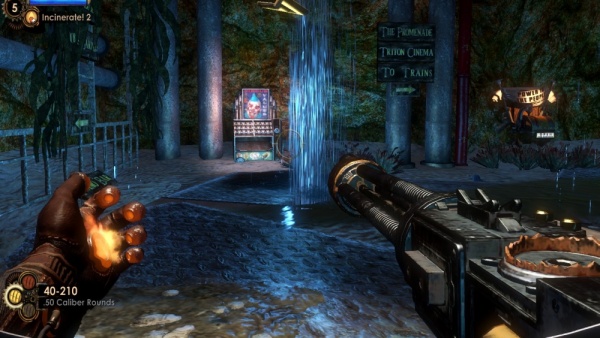 The Machine Gun upgraded with Compensator and stronger barrels. 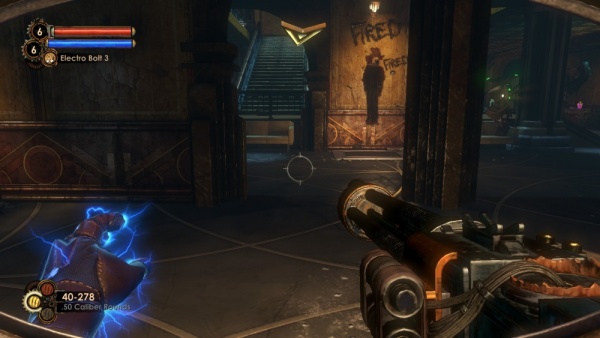 The default ammo type for the Grenade Launcher are modified Mk 2 hand grenades. The grenades are in a rocket-like shell and explode on contact. 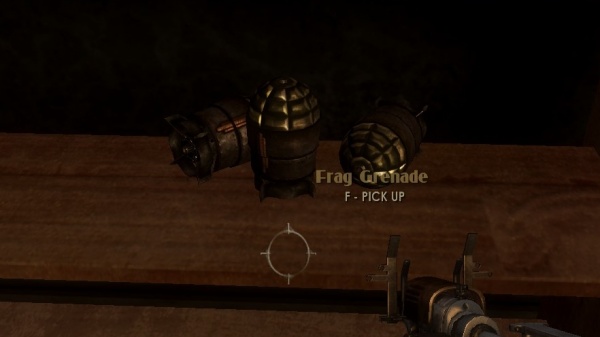 Two Single Action Army revolvers can be seen on the "El Ammo Bandito!" vending machine, which is used to purchase ammunition for the weapons the player can use. 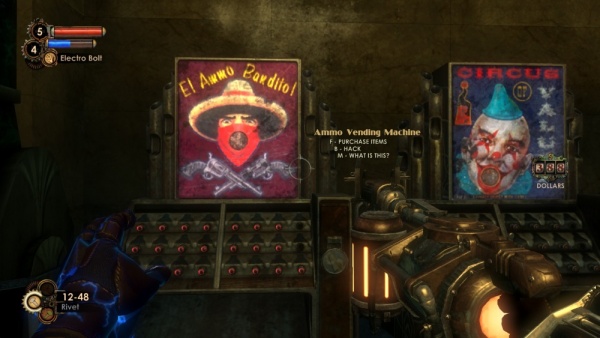 An M1911A1 can be seen on a poster at the prison section of Fontaine Futuristics. 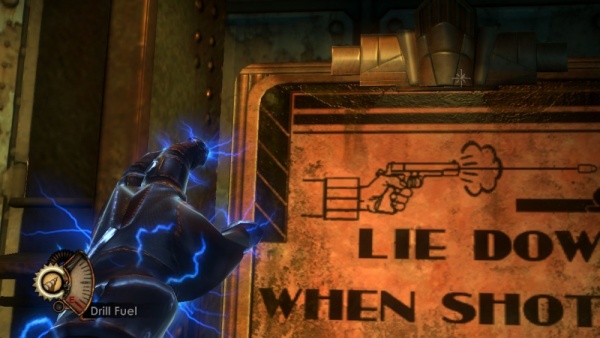 The Thompson M1/M1A1 appears on the flying Sentry Bots and on Grace Holloway's Elite Sentry Bots. These Thompsons are also using .50 caliber rounds. 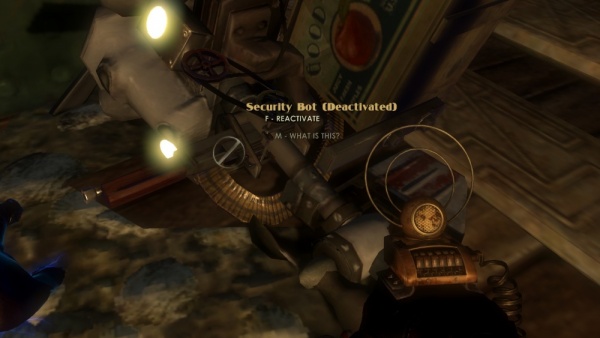 Subject Delta examines a neutralized Sentry Bot. Looks like this version of the Tommy Gun fires rifle rounds. The front sight is removed also, it would be useless anyways.