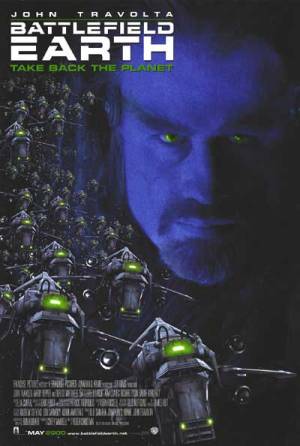 The following weapons were used in the film Battlefield Earth:

These large fictional weapons are used by the Psychlos throughout the movie. The Psychlo gun is roughly "U" shaped and consists of a small "stun" barrel at one end and a larger "lethal" barrel at the other. According to E. James Small of Small Art Works, California, the Blaster props were designed by Bill Pearson and fabricated mostly by Small himself; the "lethal" barrel incorporated a blank-firing Beretta 92 pistol to produce muzzle flash and make the action cycle. The remainder of the firing props were fabricated from aluminum. Psychlo guns not seen firing are usually made from rubber or resin, though some are mocked up around a wooden gun using the same aluminum parts as the blank-firing versions. 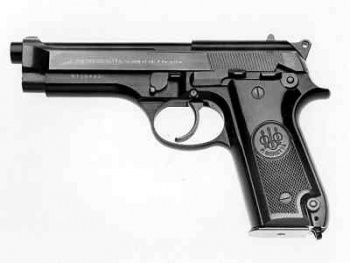 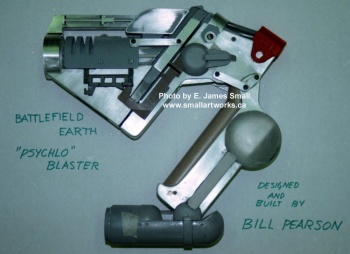 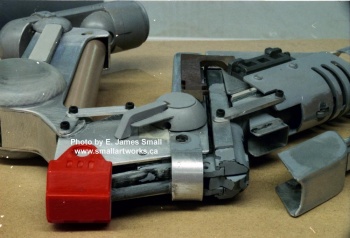 Terl (John Travolta) demonstrates his marksmanship abilities with his "Psychlo Blaster." Note the slide of the Beretta in mid-cycle.

Johnny "Goodboy" Tyler (Barry Pepper) holds a "Psychlo Blaster" upside-down. There seems to be no standard way to hold these weapons, and they are often held sideways or upside-down during the course of the movie.

The Colt Model 733 carbine appears in the film in the hands of Johnny "Goodboy" Tyler (Barry Pepper) when he's supervising fellow humans at Fort Hood organizing an attack against the Psychlo aliens occupying Earth.

Several M16A1 rifles can be seen in the film, first seen among the supplies taken from Fort Hood, later in the hands of some of the humans that battle the Psychlos.

Many of the humans involved in the battle against the Psychlos can be seen armed with Colt Model 633 9mm SMG DOEs (a shortened variant of the Model 635 SMG created for the Department Of Energy). Some of them also have lengthened barrels to accommodate the mounting of M203 grenade launchers, as described below. 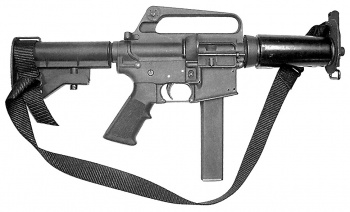 A human resistance fighter fires a Colt 9mm SMG DOE during the final battle. Note that the front sight is in the folded position, and the flange at the front of the handguard has been removed.

Some of the humans battling the Psychlos can be seen using M16A1 rifles and Colt 9mm SMG's fitted with M203 grenade launchers during the final battle. The mounting of the M203 on the Colt SMG is a rather odd combination, very rarely seen in films.

During the battle against the Psychlos, Carlos (Kim Coates) destroys a Psychlo flying machine using a Carl Gustav M2 recoilless rifle, the weapon incorrectly shown being used as a surface to air homing missile. Carlos later uses one to shatter the massive dome over the city, resulting in the deaths of the Psychlos who are unable to breathe in Earth's atmosphere.

During the battle, Chrissy (Sabine Karsenti) can be seen engaging the Psychlos with an ARWEN 37, the weapon being covered in Hollywood embellishments and depicted as firing high-explosive grenades.

Chrissy wielding her ARWEN 37 during the battle against the Psychlos
Retrieved from "https://www.imfdb.org/index.php?title=Battlefield_Earth&oldid=1501517"
Categories: