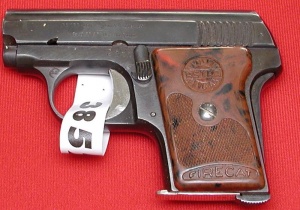 The Astra M200 was a .25 ACP/6.35mm pocket pistol manufactured by the Spanish company Astra. It was produced from 1920 until 1967. It originally did not come with a grip safety, but later models come with one. It was released as the Astra "Firecat" in the US.

The Astra M200 and variants can be seen in the following films, television series, video games, and anime used by the following actors: