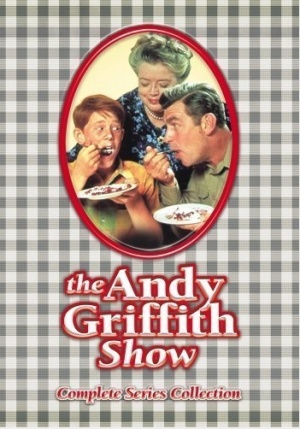 The Andy Griffith Show was a television comedy that ran on CBS from 1960 to 1968, and has been in syndicated reruns ever since. The series starred Andy Griffith as Andy Taylor, a widower raising his young son while serving as sheriff in the small town of Mayberry, North Carolina. The series cast included Don Knotts as Deputy Barney Fife and Ron Howard as Opie Taylor. The series also spawned two spinoffs: Gomer Pyle, U.S.M.C. and Mayberry, RFD.

The following weapons were used in The Andy Griffith Show:

The standard sidearm of the Mayberry sheriff's office is the Colt Official Police revolver, normally carried in a swivel-type holster. Andy Taylor (Andy Griffith) does not normally carry a weapon in his daily duties as sheriff, in the episode "TV or Not TV" (5.23) he explained that he wanted people to respect him as a person and not to fear him because he carried a gun. In the episode "High Noon in Mayberry" (3.17) Andy's revolver is shown to be kept at home, unloaded, hidden on the top of a china cabinet. Deputy Barney Fife (Don Knotts) always carries his revolver while in uniform, but due to problems with negligent discharges the sheriff requires Barney to carry the revolver unloaded with one round of spare ammunition, which he keeps in his shirt pocket. Only when action was imminent did Andy allow Barney to fully load his revolver. Barney also used the four-inch Official Police for plain-clothes duty, simply stuck in his waistband at the small of his back. Barney's replacement as deputy sheriff, Warren Ferguson, carried the same type of revolver but added a shoulder belt to his Sam Browne gear. 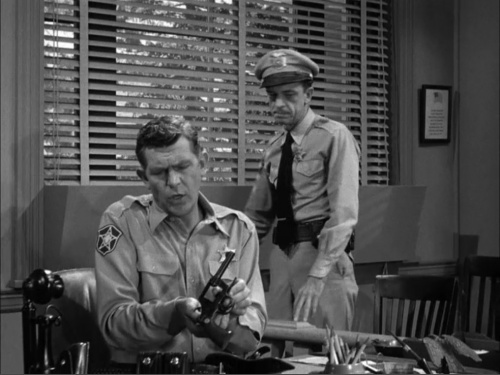 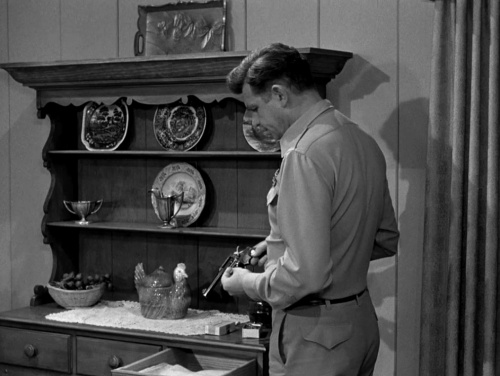 Andy loads his revolver at home after retrieving it from on top of the china cabinet in "High Noon in Mayberry" (episode 3.17) 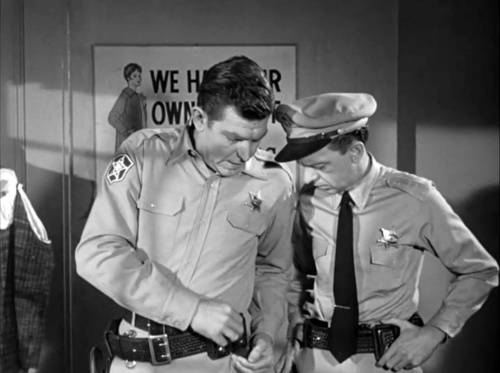 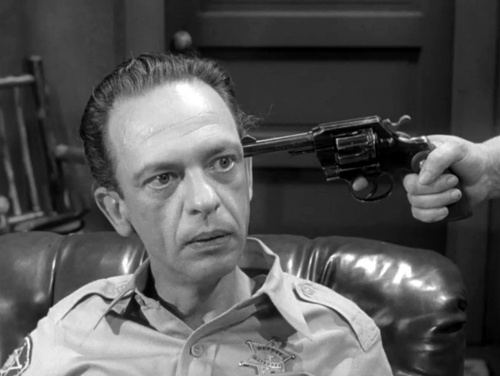 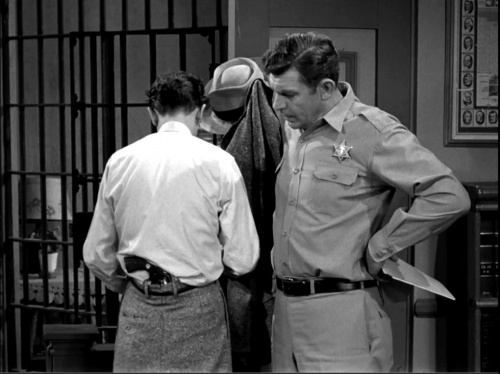 Andy looks at Barney's plain-clothes rig in "If I Had a Quarter Million Dollars" (episode 5.22) 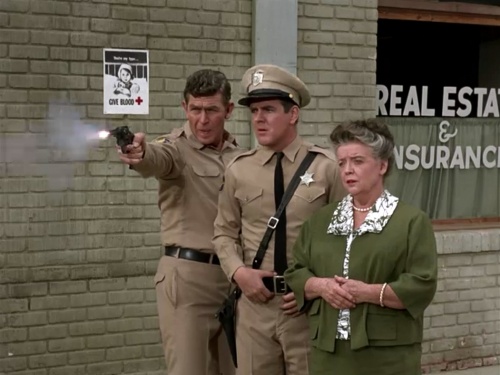 After becoming a detective on the Raleigh, North Carolina Police Department, Barney Fife (Don Knotts) carried a Colt Detective Special, which he wore in a crossdraw belt holster. 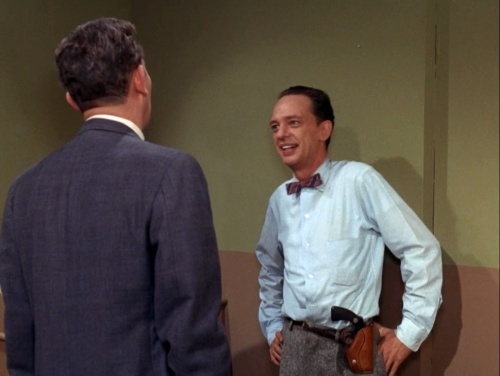 Barney (Don Knotts) with his holstered Detective Special in "A Visit to Barney Fife " (episode 7.18) 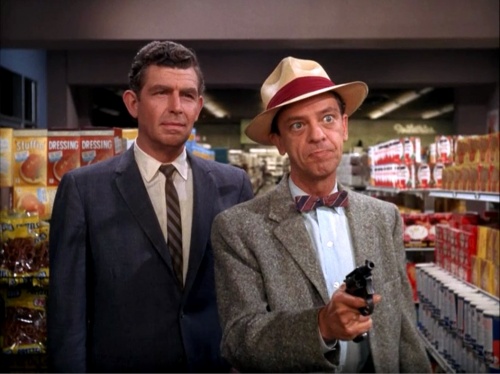 Barney holds his Detective Special on suspects in "A Visit to Barney Fife " (episode 7.18) 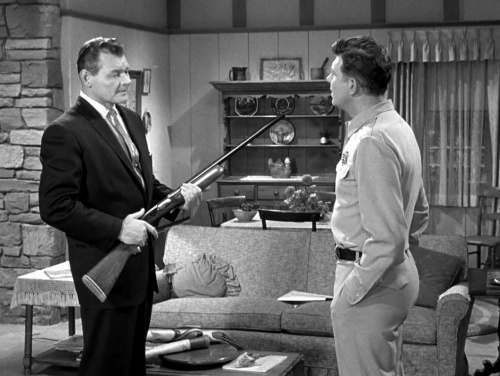 Andy takes a Winchester Model 1897 shotgun from the courthouse gun rack in "The Big House" (episode 3.32). 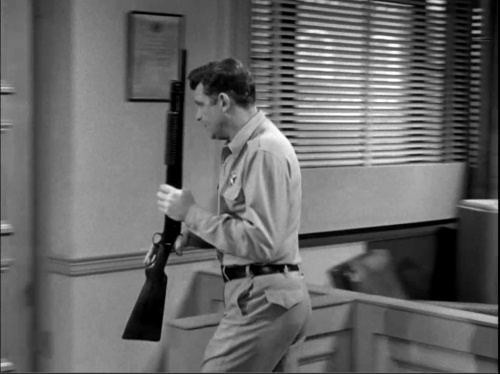 Andy leaves the courthouse with a Winchester 97 shotgun

Andy (Andy Griffith) carried a Winchester Model 1912 shotgun with a ventilated sight rib in "The Legend of Barney Fife" (episode 6.18). 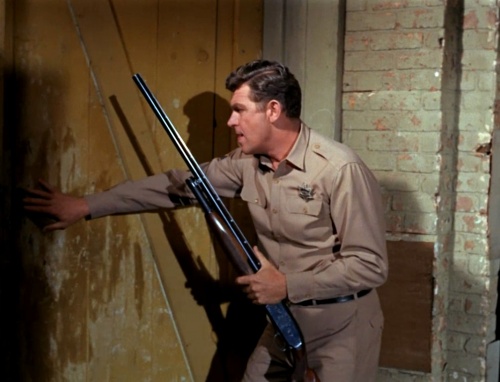 In "A Black Day for Mayberry" the Treasury Guard is armed with a Thompson Submachine Gun with a drum magazine. During the changing of the guard, Barney (Don Knotts) is given the Thompson, and after the cover is blown, Andy quickly disarms Barney before he can fire at the Armored Truck. (It should be noted that the armor would have easily stopped the .45 ACP rounds. On closer examination of the gun, it appears to be either an early MGC replica, or a demilled non-gun, due to the lack of any markings on the left side of the receiver) 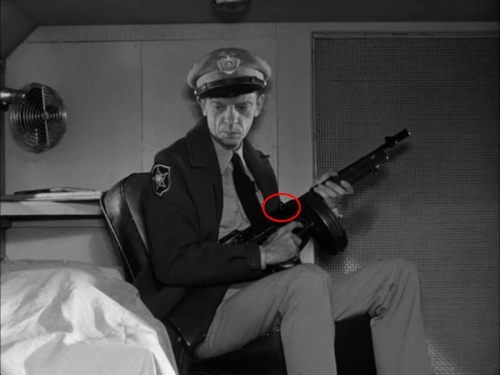 Barney waits in the Armored Truck. Note: The actuator knob (in red) is forward, which means the gun cannot be fired, without cocking the handle back, since it is an open bolt gun 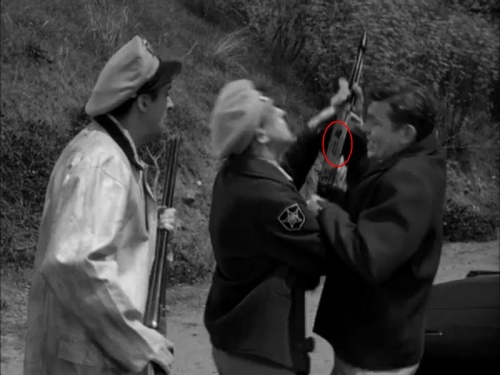 Andy Struggles to disarm Barny before he can shoot at the Armored Truck. Note: The actuator knob (in red) is still forward, rendering the gun useless 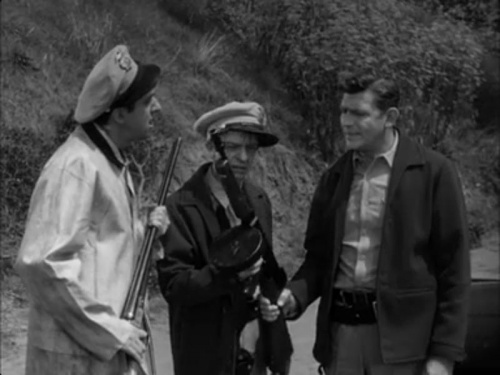 Andy hands the Tommy gun back to Barney. If you look closely, the drum magazine appears to be a dummy, and the "Cutts Compensator" does not look genuine and the lack of any markings on the receiver, leads one to suspect the gun is either a demilled prop, or and early MGC replica
Retrieved from "https://www.imfdb.org/index.php?title=Andy_Griffith_Show,_The&oldid=1148888"
Categories: