Alien Resurrection is the fourth installment in the Alien film franchise. In this 1997 sequel, a clone of Ripley (Sigourney Weaver) joins forces with a mercenary transport crew to fight off Aliens who have infested a military space facility. The film was directed by Jean-Pierre Jeunet (The City of Lost Children) and the cast included Winona Ryder, Ron Perlman, and Raymond Cruz.

The following weapons were used in the movie Alien Resurrection:

Though the average film goer may assume that these firearms are based on real weapons, evidence suggests that all weapons in Alien: Resurrection are fabrications rather than converted firearms. Though some articles have suggested that this was done to save money by not hiring a firearms wrangler, the fact that the mockups still fired pyrotechnical charges meant that a licensed pyrotechnician would still have to rig the weapons for each shot, which is actually more expensive than a gun wrangler loading up a mocked up live firearm with blanks. The pistols were resin kits, while larger weapons were made mostly from machined aluminum. The distinctive "shock rifle" used an internal electrically-operated revolver-style cylinder loaded with small pyro charges to simulate firing. Ever since the release of the film, however, there have been erroneous commentary in film articles which wrongly identify Christie's pistols as modified SIG-Sauer P232s. Also the report that a prototype sci-fi rifle (made after the film, not before) of the USM shockrifle was built on a Cobray CM-11 carbine leads to some confusion in the cinema trivia world.

It is because of this confusion that we list the film and its weapons here, though the 'official' IMFDB standard is that films/TV shows/Anime/VG where the weapons are pure props and are not based on live weapons usually do not qualify. The Fictional firearms rule: "If the weapon (for any reason) would lead the general public to believe that it is a real firearms or based on one." also makes this page qualify.

The standard United Systems Military Sidearm is famously used by Johner (Ron Perlman) in both hands, to dispatch the Alien hanging on the leg of Christie (Gary Dourdan). 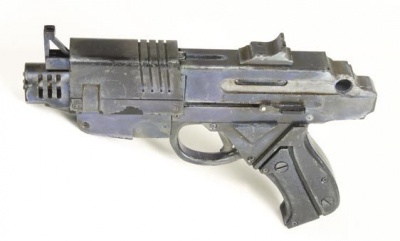 Closeup of a soldier with the sidearm.

Johner (Ron Perlman) dual-wields the handguns to dispatch the Alien hanging on the leg of Christie (Gary Dourdan). When hanging from the ladder with the two handguns mentioned, Pearlman later found out that he had severely cut up the backs of his legs during the filming of the scene.

Call (Winona Ryder) is seen carrying a Zipgun, which she gives to Dr. Wren (J.E. Freeman) at one point. 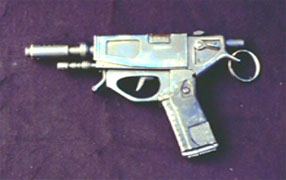 For his sidearms, Christie (Gary Dourdan) keeps two on arm-anchors. After the gym scene, he is only seen with one, with which he threatens Wren with, and tries to kill the Alien hanging on his leg, in his final moments. The arm-anchors were inspired by the drawer slide mechanism Travis Bickle mounted his Smith & Wesson Escort to in Taxi Driver.

Christie (Gary Dourdan) with his two pistols on arm-anchors drawn.

The dual pistols are drawn. 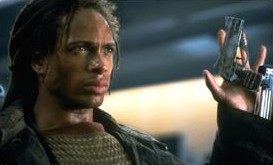 Production still of Gary Dourdan as Christie with his Arm-Anchored Pistol.

When Johner (Ron Perlman), Christie (Gary Dourdan), and Call (Winona Ryder) are watching a Space Shopping program, one of the objects up for sale is a M1911 clone called the "Okee-Doke Corral Cowboy Pistol". It resembles the Colt/Detonics 1911 Hybrid seen in Terminator 2: Judgment Day. What is ironic, is that in the far future, the price is not far off from today's prices for an M1911 clone in any gun store.

The "Corral Cowboy Pistol" is seen for sale. At almost $1000, the price is not far off from today's prices for an M1911 clone in any gun store.

Vreiss (Dominique Pinon) keeps a collapsible double-barreled pump action weapon in his wheelchair. The parts of the weapon are concealed within the wheelchair and Vriess is seen assembling it when he sees an Alien in the ceiling. The weapon later jams after the swim through the flooded kitchen and it is not seen again after this scene.

The shotgun in the hands of Vriess (Dominique Pinon).

The Lacrima 99 Shockrifle is the standard issue assault rifle used by the United Systems Military personnel in the film. Its main setting fires solid slugs. The weapon is rarely seen being fired on screen, but the assault rifle mode is used by both Ripley 8 (Sigourney Weaver) and PFC. Distephano (Raymond Cruz) to kill Aliens at various points in the film. The rifle can also be fitted with an under-barrel shock device which acts like a taser, but without causing the target serious physical harm. The taser setting is used on Ripley 8 (Sigourney Weaver) when she is strangling Wren. The rifle is also notably dual-wielded with an Incinerator by Elgyn (Michael Wincott), but he never gets to fire either. 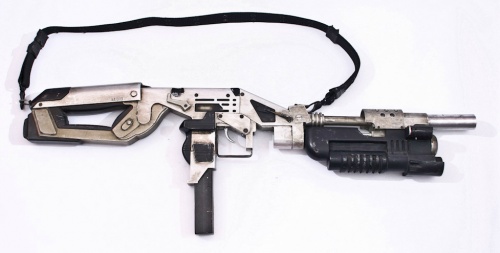 Distephano (Raymond Cruz) with his Lacrima 99.

Elgyn (Michael Wincott) holds the Lacrima 99. Notice the shock component is not fitted to this weapon.

The Draco Double Burner is a versatile multi-mode weapon employed by the United Systems Military. While it is primarily a flamethrower unit, it also functions as an assault rifle or a grenade launcher. The weapon features a built-in LED ammunition counter that displays the amount of ammunition remaining, similar to the classic M41A Pulse Rifle from Aliens. The weapon's assault rifle mode is used by Johner (Ron Perlman) at the end of the film to kill the Alien that births from Purvis through Wren's forehead.

Christie with the Draco Double Burner.

The grenade launcher mode of the Draco Double Burner is seen used by Johner in the flooded kitchen; it is fired at one Alien, but the creature dodges the grenade, only for it to destroy a second Alien behind. It is worth noting such an explosion underwater would likely deafen everyone in the water nearby.

Another of Vriess' concealed collapsible weapons is a pump action grenade launcher. It is never shown in the film where he stores it, although it is assumed the parts are hidden in his chair like the shotgun. Vriess is seen assembling it after the, "What were you expecting, Santa Claus?" line. It is later used by Christie to destroy the egg trap set by the Aliens, right after escaping the flooded kitchen.

The flamethrower mode of the Draco Double Burner is seen used by Ripley 8 (Sigourney Weaver) to destroy the lab containing the USM's seven previous failed attempts at recreating her and the Alien Queen gestating inside her. 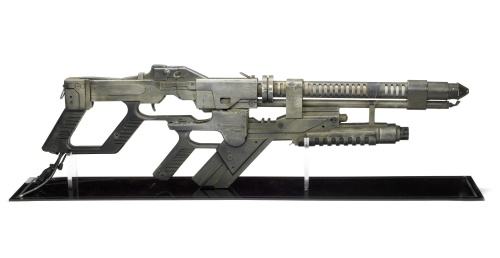 Screen used Draco Double Burner flamethrower prop from Alien: Resurrection. Note the tubes and wires sticking out of the stock, which were needed to produce the flames.

The Draco Double Burner in the hands of Ripley 8 (Sigourney Weaver), when she is destroying the 'failures'

Ripley uses the Draco Double Burner much like she does in Alien and Aliens.

Another concealed weapon used by the crew of the Betty is the Thermos Gun carried by Johner (Ron Perlman). He briefly uses it during the fight in the gym. Judging by the damage it causes, it is supposed to be some kind of immensely powerful shotgun. 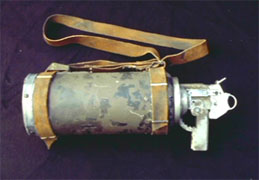 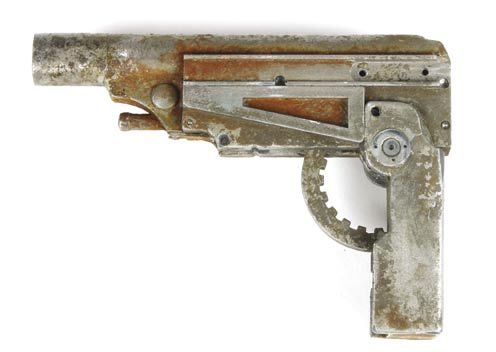 The Thermos Gun separated from the thermos.

The Thermos Gun is pulled out by Johner (Ron Perlman)

The Thermos Gun is "fired" by Johner (Ron Perlman).