A Rumor of War 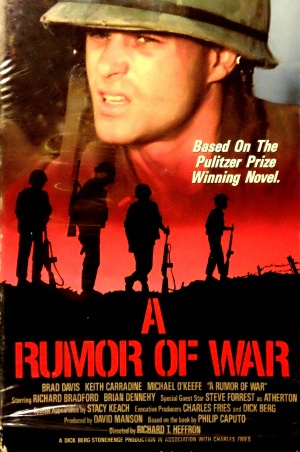 A Rumor of War was the 1980 television adaptation of the bestselling memoir of Lt. Philip Caputo (portrayed by Brad Davis), a Marine officer who served during the early days of the US involvement in the war in Vietnam. The majority of the scenes set in Vietnam were in reality filmed in Mexico.

The following weapons were used in the miniseries A Rumor of War:

The majority of the US Marines in the film are seen carrying what appear to be Beretta BM59 rifles, most likely due to their resemblance to the M14, the actual rifle carried by Marines at the beginning of the war. Lt. Philip Caputo (Brad Davis) is also seen with the rifle. 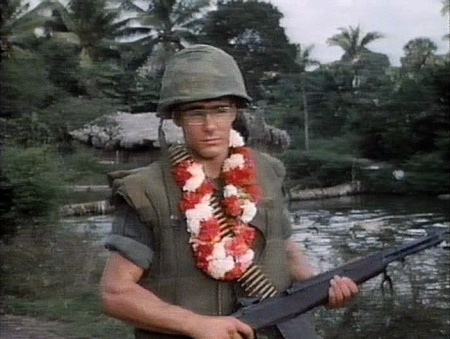 The Marine with the Beretta rifle. This rifle was chosen due to its resemblance to the M14 rifle. 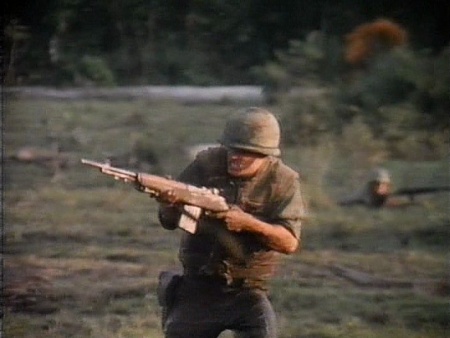 Numerous US Marines are also seen carrying faux M14 rifles, which were built up from stock M1 Garand rifles, with an M14 style flash hider added, a fake box magazine and the addition of a faux M14 top handguard on top of the Garand wooden handguard. Lt. Murph McCoy (Keith Carradine) also is seen with the rifle. Similar rifles were used in the film Escape from the Planet of the Apes. 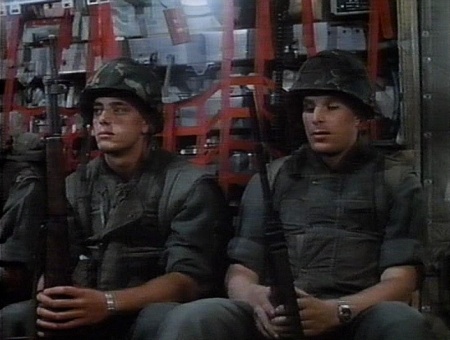 Marines on a transport carry the "faux" M14 rifles. 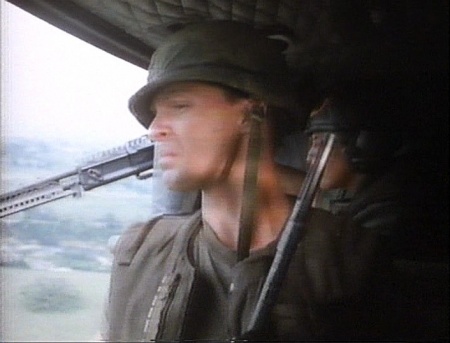 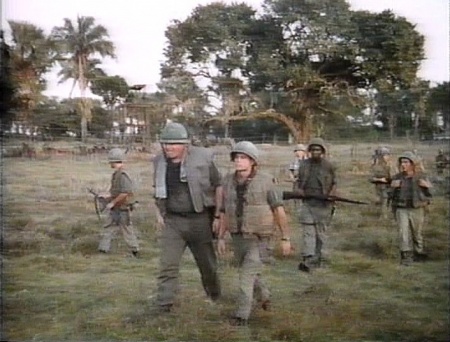 The Marine on the right with the "faux" rifle.

Lt. Caputo is briefly seen with an M1 Carbine during the attack on the Marine base. 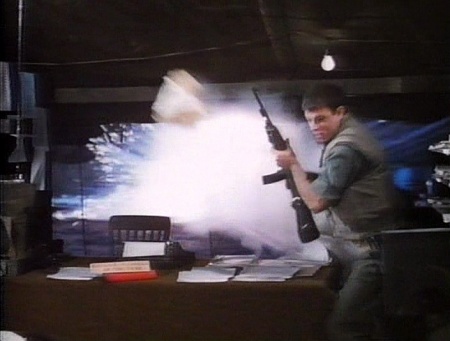 As what was common for productions in the 1970's and early 1980's, the Valmet M71S rifle is seen used as a substitute for the AK-47. The rifle is discovered in a hidden weapons cache when the Marines search a village. 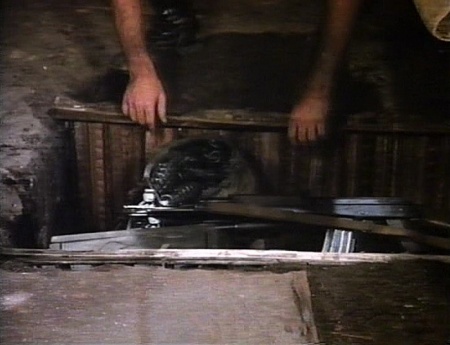 Several officers and NCO's, including Lt. Philip Caputo (Brad Davis) and Sgt. Coleman are seen carrying the M1911A1 pistol as their sidearm. 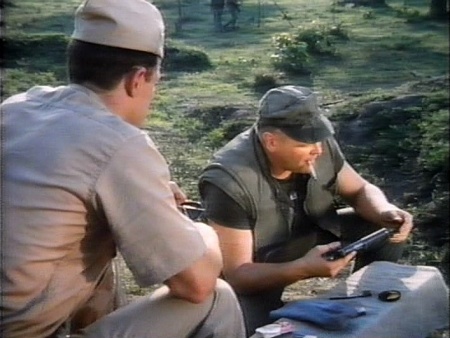 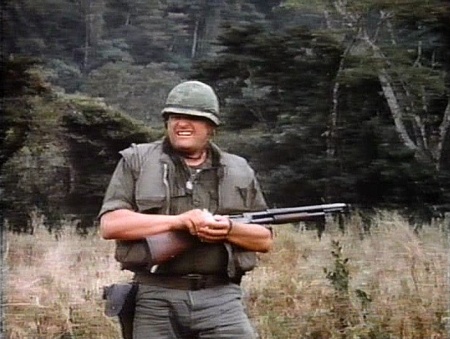 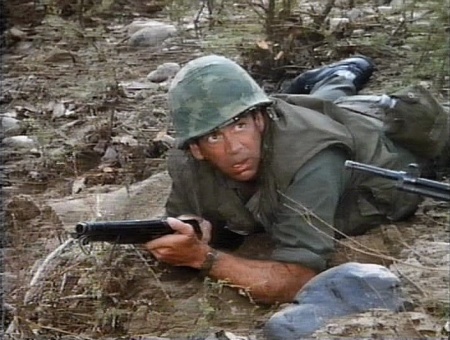 The M60 is seen carried by Marines as well as mounted in Huey helicopters. 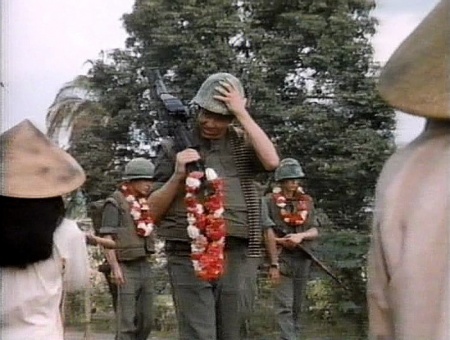 Woodward (Perry Lang) carries the M60 while on patrol. 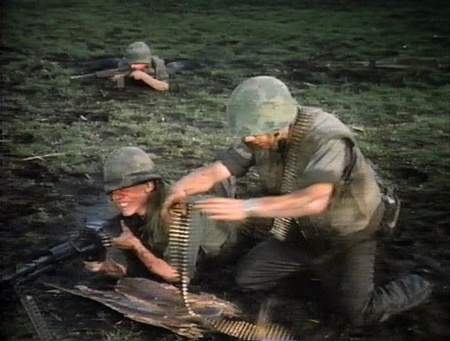 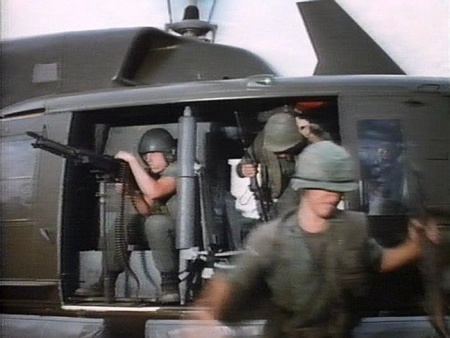 A M60 is manned by a Marine gunner aboard a Huey. In reality, the Huey did not enter into service until later in the war and not the more modern variant seen here. 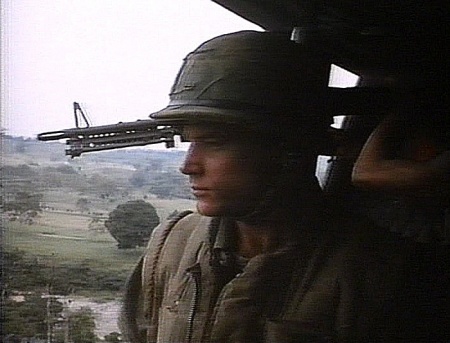 The M60 is seen behind Lt. Caputo (Brad Davis).
Retrieved from "https://www.imfdb.org/index.php?title=A_Rumor_of_War&oldid=1448493"
Categories: